Yarn for a New Age

Check Me Out I'm Everywhere!!!!

Pumpkin Plants are taking over the house 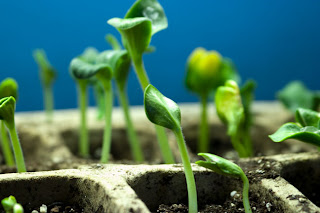 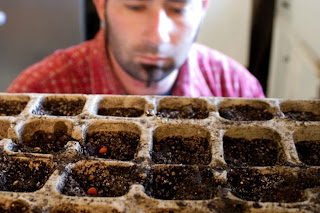 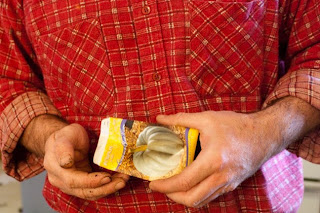 I guess it has been a while since the last post. The month has gone by so fast that I never have time to write. To update the pumpkin growing....At final count we have 31 varieties of pumpkins and over 6,000 seeds. We have started many types indoors so we have seedlings to plant outside in a couple of weeks. There are a handful of types that have a longer maturity date and we started those first. They included the Howden Biggie, the Fairytale, Bliss, Rouge, and this large white/pink thing. We want pumpkins from the beginning of Sept to the end of Oct, so we are trying out the idea of starting some earlier than others. That way we can have some harvested and still have some for a "pick your own" patch.
The second group we planted include Blue Moons, Goosebumps, Winter Luxury, Valento, Lumina, Red Warty thing, Cotton Candy, and Butter nut squash. We planted 8 seeds of each and all of those are coming up. So now the dilemma is what do we do with these quick growing large plants, since the locals suggest we don't move the plants out side until May 15? Solo Cups!!! Each plant is being moved to it's own party cup and set up on an 8 foot long folding table in the living room. 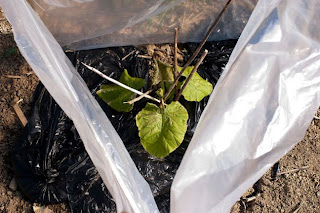 The giant pumpkin experiment is on. We have one outside in a plastic walled hut in attempts to have a fairly large pumpkin by the time of the Shippensburg Fair at the end of July. It is a normal Dill giant, we have the hopes of getting a 400 -500 pound pumpkin from it. Inside the 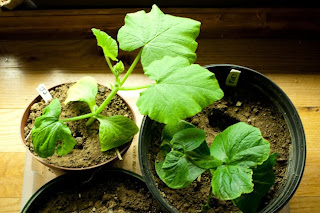 The field where our pumpkins are going to be planted has been cleared of large rocks and is now going to be plowed. We had planned to plant around the rocks but now we don't have too.
As for the other veggies and seeds. We have had good luck with the tomato seeds, the plants had grown quite large from January when we were checking the air in the house. The warm weather came and someone...not mentioning any names... thought it was a good idea to plant the tomatos in the garden. The plants were large and getting root bound in the containers they were in, so the idea was to get them out before they died. I had suggested that it was not warm enough yet, but no they were planted and now they are dead. So the lesson for the week is no matter how warm it is in the beginning of April, don't plant your tomatos outside until May at least in our area. SO I have replanted more seeds and they are being babied inside.
We have also planted cucumbers, basil, cilantro, eggplant and peppers. Everything is growing well.
**Here's a little note to anyone who wants to garden and start seeds indoors with a toddler who wants to help...write the name of the seed on the container NOT on plant sticks. We planted 9 different hot pepper plants with the intent to sell some at market, we made plant sticks for each peat pot in the tray. We watered them and placed the tray on the heat mat under on the plant stand under the light. we turned our backs on the tray for a minute to clean the counter and get our notebook to write down how many of each we planted, the order in the tray and whatnot....when we came back to the tray little fingers had removed all the tags, mixed them up and we retagging pots. In the process some seeds had been pulled out and stuck back in randomly. So we have a tray full of growing hot pepper plants but have no idea what is what, so they will be for personal use.
As for the animals 4 out of 7 animals have been sheared. The Angora goats did fine as always, Lily the one year old Baby doll sheep was very crazy and was nicked a couple of times, but we patched her up and she looks great today. Well as good as she can look with the hack job I did on shearing her. While we were shearing yesterday there was a whole new group of chicks that hatched. At last count this morning I think there were 12 babies running around.
Posted by Stephanie Nericcio at 1:45 PM